Draggin has been using genuine DuPontâ„¢ Kevlar® in its products since it first began production of its jeans back in 1997. Despite there being a number of alternative fabrics available nowadays, the company sees absolutely no reason to use anything else.

For more than 50 years, DuPont’s Kevlar has been the number one choice for strength and safety in a variety of applications across a broad range of industries. The company’s heritage and experience in the field is unrivalled, giving its customers total peace of mind and complete assurance that the product does exactly what it’s designed to do.

Well known for its use in military and law enforcement protective clothing, Kevlar is a key component in body armour and flak jackets helping to protect personnel from ballistic projectiles, explosive fragmentation and other combat hazards. Five times stronger than steel on an equal-weight basis, it offers superior protection, yet is lightweight and comfortable enough to help improve mobility and reduce fatigue in the field.

Given its effectiveness in such extreme situations, Kevlar’s use in motorcycle apparel was a natural progression and it was Draggin’s Grant Mackintosh who pioneered its use in jeans. Given his many years of experience in the field, Grant is uniquely placed to answer questions that often come up regarding the use of Kevlar in protective motorcycle wear. In the following text he attempts to address these.

Q: Any jeans advertised as made with Kevlar are going to protect me, right?

’œNot necessarily,’ says Grant. ’œUnfortunately there are some poor imitators out there using the Kevlar name for a fibre that is absolutely not made by DuPont. We have developed our own lining, while many others just call up the factories in the Far East and ask for Kevlar, but they can’t guarantee what they are getting. Worryingly, some of them just use yellow cotton while others are actually flammable. The only way to be sure is if they have the DuPont logo on the label. I’m proud to say that we were the first motorcycle jeans manufacturer to pass strict DuPont criteria to attain a licence agreement and we were also the world’s first DuPont Preferred Licensee for motorcycle garments.’

Q: I was told that during a slide, Kevlar jeans can get very hot and either burn or melt onto the skin. Is this true?

’œDuPont Kevlar has no melting point, so there is zero chance of it melting onto the skin,’ explains Grant. ’œAs far as heat goes, perhaps in some brands of riding jeans there may be an issue with heat transfer – it depends on the fabric and whether a liner is incorporated. Our knitted fabric, for example, produces a soft material in which the loop of the fabric faces the road. This is more than twice as effective at dissipating heat and resisting abrasion as a flat weave and also results in faster deceleration. Add to that an internal lining and you’ve got all the protection you’ll need from both heat and abrasion.’

Q: I read on the internet that Kevlar degrades through hydrolysis. Does that mean I can’t wash my jeans?
’œThis is yet another unsubstantiated claim,’ says Grant. He goes on to explain, ’œDuPont itself says that fabrics engineered with Kevlar can easily be washed at high temperatures and tumble dried. In its Kevlar technical booklet it clearly states that there is no degradation to performance of the material due to water exposure – tests have even been carried out where Kevlar was submerged in ocean water for 12 months and no degradation occurred.’

’œEverything is susceptible to degradation from UV exposure,’ says Grant. ’œHouse bricks, car paint, and yes, Kevlar, but that doesn’t mean your jeans are going to be useless after a summer’s riding. I don’t know about other brands of motorcycle jeans that use, say, Vectran for instance, which is well known to have very low UV resistance, but from evidence we’ve collected so far on our own products we’ve been really surprised by what we’ve found. We recently had a pair of 11 year old Draggin jeans returned to us for data collection after they protected the rider in a crash. The incredible thing is that they actually tested 30% better than when new and had most certainly been washed, worn with bent knees, rained on, sweated in and worn in the summer sun in Australia for over a decade,’ he reveals. ’œIt’s really exciting and with our lab tests we are seeing similar improvements in performance with intense washing, drying and retesting. We continue to have fun figuring out and pushing the science behind it!’ 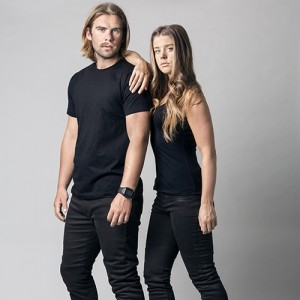 Draggin’s slim-fit Twista riding jeans are now available in black, in sizes to fit both men and women.

Twista jeans have a seamless design – with no visible panels or external stitching from the protection inside – which gives the appearance of regular fashion jeans. Now in black, they offer sleek versatility and smarter appearance than traditional blue jeans.

Made from stretch denim, for comfort and freedom of movement on and off the bike, the mid-rise waist is tailored for rider coverage in the saddle and the straight leg is designed to fit over riding boots.

On the inside, Draggin’s unique protective lining is secured with heavy-duty triple stitching in key impact areas. Knitted from a combination of DuPontâ„¢ Kevlar® and Dyneema® – the world’s strongest fibre – it is highly abrasion resistant, whilst being soft, breathable and non-allergenic.

Draggin is the first manufacturer of motorcycle jeans in the world to be officially licensed to use DuPontâ„¢ Kevlar® aramid fibres. Originally developed by DuPontâ„¢ in 1965, Kevlar® aramid fibre is lightweight and extraordinarily strong, with five times the strength of steel on an equal-weight basis.

For added impact protection, Draggin Dffuse CE protectors can be fitted into internal pockets on the knees, and are included free with every pair.

Exclusively distributed in the UK by The Key Collection, Draggin Twista jeans are available in men’s waist size 28 to 44 inches and women’s sizes 8-18.

Draggin Jeans have been recognised as one of the top 50 products in the world to use Kevlar®, as part of the 50th anniversary celebration of the fibre’s inventors, DuPontâ„¢. 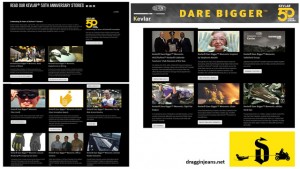 Draggin is the only motorcycle clothing brand to be credited in the ’50 Years Strong’ campaign – a year long celebration of the DuPontâ„¢ brand, during which the company listed 50 of the most innovative and successful brands and products to use its Kevlar® fibres. DuPontâ„¢ cited the effectiveness and innovative use of the Kevlar® in the Draggin design as one of the reasons Draggin was selected for the top 50 accolade:

“The science behind the jeans is all in the lining’¦What that means, is that when the rider is sliding, during an off, the knit of the fabric acts to dissipate the heat away from the body. It slows you down so that you don’t get as much friction and thus minimises injury.

’œIt’s that lining that represents a revolution in fiber technology. With DuPontâ„¢ Kevlar® forming its core, the lining is soft, breathable, flexible and non-allergenic.”- They also recognised Draggin founder Grant Mackintosh’s devotion to testing his creation:

’œThere are not many companies that can say the boss literally ’˜put his butt’ on the line to prove his product’s safety, but Draggin Jeans can.

’œFounder of the iconic motorbike apparel Draggin, Grant Mackintosh tested the limits when he snuck off to the racetrack to literally, be dragged along the asphalt wearing a pair of his jeans, but in doing so he put his money where his mouth was, and proved to the world of motorcycling, that Draggin Jeans were everything he declared them to be.’

Best known for its use in ballistic and stab-resistant body armour, Kevlar® was invented by DuPont after scientist Stephanie Kwolek made her discovery of the first liquid crystal polymer in 1965.
Lightweight, extraordinarily strong and flame resistant, it is used in numerous applications, from fire-fighting and industrial protective clothing, to vehicles, fibre-optic cables and tyres, as well as sporting apparel and equipment. In 2014, Draggin Jeans became the world’s first manufacturer of motorcycle jeans to be officially licensed to use DuPontâ„¢ Kevlar® aramid fibres. Each pair of Draggin Jeans features a protective lining, knitted using a combination of DuPont Kevlar® and Dyneema® – the World’s Strongest Fibreâ„¢ – and secured with heavy duty triple stitching in key impact areas, to help keep the wearer protected during a slide or fall. Soft, breathable, flexible and non-allergenic, the lining in Draggin Jeans offers superior protection to basic woven or knitted Kevlar® alternatives, surviving EU abrasion testing in key contact areas for 4.4 seconds. This is more than twice the duration of most other denim biker jeans with ‘protective’ aramid linings.

As part of the official partnership, Draggin continues to work directly with DuPontâ„¢ to help develop the most effective ways to use aramid fibre in motorcycle jeans – the only manufacturer to do this.- See the full Draggin Jeans here.